Why mix baking soda with acrylic paint? It’s the latest design trend – the vintage look with a muted, matte color like pale yellow, mint green, or peach. But perhaps you don’t want to spend money on chalk paint. Well this approach is just for you!

Baking soda is the perfect ingredient to get that “chalk paint” effect – ideal if you are into the rustic “farmhouse” look regarding objects d’arte. 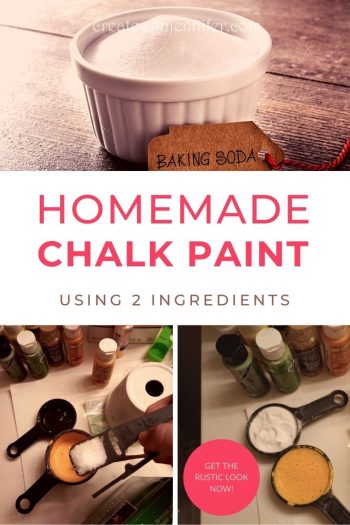 It’s a great way to transform an ordinary object into an eye-catching one to complement your style of decor for, let’s just say, pretty cheap!

This can be done with a variety of objects made from ceramic, glass, old vases, flower pots, etc.

Now I’m going to try my hand at it. This is one object I’ve chosen. This pot once held something previously before i re-potted it. I don’t like that color. It’s ugly. A funky watered down brown. So let’s change that. There is a label on the back I need to remove with rubbing alcohol, but after I clean it up, it will be perfect for this experiment. 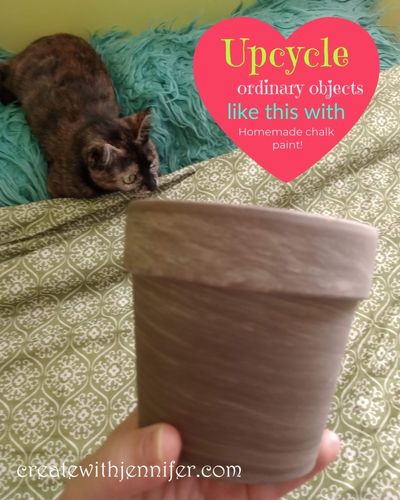 For this, be sure to choose a matte color. I don’t want to bother with the primer end of things…Well, that may not work, taking shortcuts. So I finally have applied a coat to the pot – this is  ivory white by FolkArt. Now to allow it to dry. That’s a wrapper I have set it on so it won’t stick to that sheet of paper below it.

As you can see, I have a number of colors I like that will work for this, but am going to narrow it down. Finally I decided to go with the yellow made by the Michael’s (arts and crafts supplier) product line. 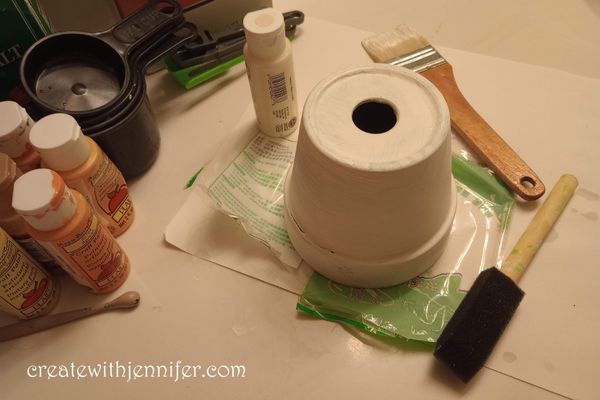 2 parts paint to one part baking soda, coarse salt can also be added to create even more texture.

I don’t like words like “part” as they sound so nebulous, so that’s where the measuring cups and spoons come in. You may want to have these on hand, too, in addition to something to stir in with, and in. 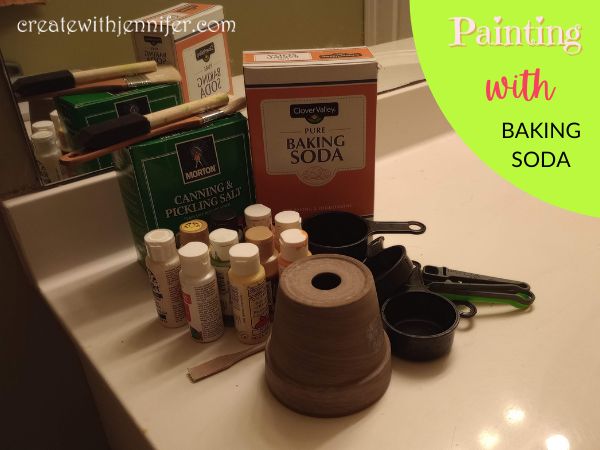 About half a cup of paint and a fourth of a cup of baking soda would be a good ratio to start with. Stir to check consistency.

The salt you see me using here, it’s actually made for pickling, but I think it will work for this purpose. I have only used it once, no reason not to take a pinch of it to create a “grainy” look and feel.

I’m using a third of a cup of baking soda and a half a cup of paint. I wasn’t sure I’d have enough in the bottle  so I had to guess-timate a little, and then again, because it was a little older, it was kind of clumpy so I added a little water to it to get it back to a better consistency as well as loosen up what was left in the bottle. 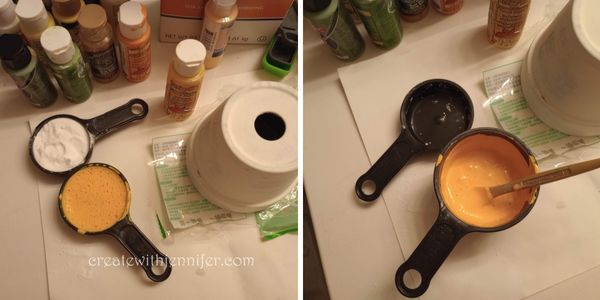 I have the pot on top of a plastic wrapper to keep the paint from sticking. Ever had that happen- at the last minute you realize you forgot something and had to grab whatever was available. In this case, wax paper. I’m using the biggest measuring cup to mix them together. I saw no point in actually using another container, hey.

Next, I added a teaspoon of pickling salt. Now to combine and test with my stick to see how it turns out. In a way it was kind of like pancake batter with a little more thickness. 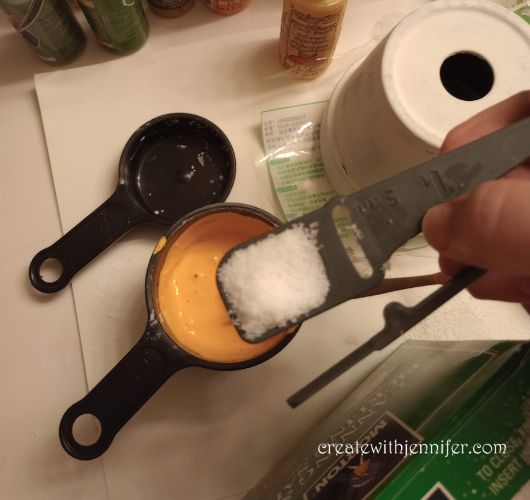 Now on to the application part, let’s see how this goes. If I didn’t know any better, I’d say the rock salt pretty much dissolved in the mixture (blah…)

Here’s how it looks. I think it could use a second coat….Now I’m kind of having second thoughts about this color choice. I love it, but is it “too bright” to be qualified to be a matte one with a rustic look? I mean, it’s more like a “pure” yellow. Just because it’s not glossy, doesn’t mean it’s going to give you the right look. 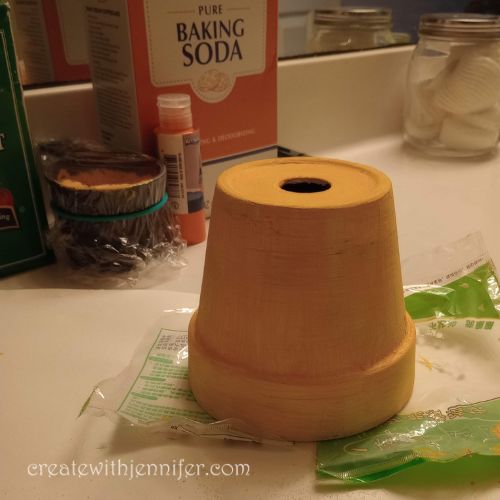 After primer and first coat

I thought about using yellow ochre at first, which is what I chose for a big mason jar I upcycled a couple of years ago….and is more apropos for the “modern farmhouse” look…not a trend I really go for as I prefer genuine antiques that have aged naturally as opposed to being artificially “distressed”.

UPDATE: Here is the pot again, the next day, after the second coat of paint. Just fyi, i thought I would add a little more salt to the mixture to see if it would change the texture, and walla – in the words of an old Blockbuster video ad, Wow, what a difference!

I love how the extra salt gave it the look of something naturally earthy and natural – what do you think? 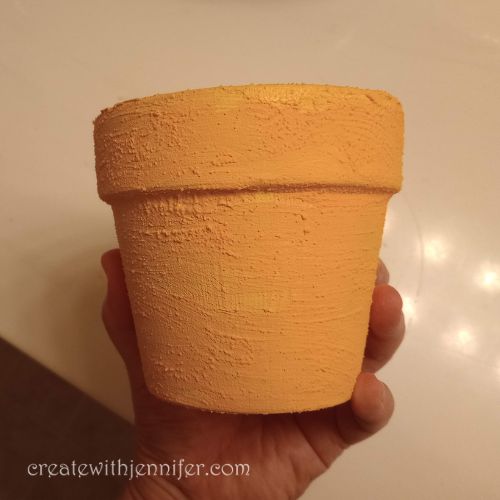 After the second coat -much better

Well there you have it, that is how you get the look and feel of chalk paint by just two simple additives. Will you try it for yourself?

Through the different tips, tools and tutorials you too can experience the joy of working with acrylic paints for crafts, sculptures, traditional paintings and much more!

How to Soften Polymer Clay – Three Things That Worked For Me!404 Total Shares

How to Bake Polymer Clay Like a Pro (Plus Do’s and Don’ts!)230 Total Shares

Homemade Primer Paint- Run Out? You Can Make This in a Pinch!162 Total Shares 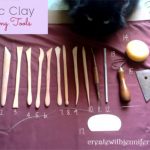