Hey budding artists..are you seeking the best drawing tablet for beginners to really hone your trade? Let’s face it, if you are going to go for professional looking work, your mouse can only take you so far. Can I draw with my mouse? Of course. But can I do much better taking advantage of this helpful tool? You bet.

Non-geometric, amorphous, and unique shapes that make up vector illustration need to be handled with precision. If you’re somewhat of a newbie there are some things you may want to know about first.

What’s the best graphics tablet for a beginner? How much do I have to spend to obtain one that will do the things I need to do (but without some of the frills)? Let’s take a look at that now.

The questions you may be asking yourself, more or less:

Now only you can answer the first two questions, but to the third one…yes! You can find a great deal on one; so let’s get into the nitty-gritty of the best graphics tablets for drawing out there for those of you ready to dip your toe in the water. starting with my own experiences.

The tablet I own is the Tooya Pro tablet made by PenPower which also included a bonus Photoshop Elements program. This turned out to be a “happy accident” that ended up in my repertoire.. My husband is a fan of the Wacom brand – he pronounces it “whack ’em” I guess that’s correct 🙂

At some point he had misplaced it and ended up purchasing the Tooya Pro in 2012. But guess who ended up doing the lion’s share of use – yep, yours truly!

The Tooya includes an ergonomically designed stylus pen, which requires 1 triple “A” battery -that’s the “really little” not the “little” ones LOL. The pen tips are also replaceable, 2-3 extras are also included.

Like all software, tools and accessories out there, the Tooya pro tablet is not without its drawbacks and one of these may be system compatibility. I would not recommend it to users of Windows 8 and beyond and Linux users. If this is the case you may want to consider seeking a model released a little later.

It’s almost a total plug and play operation, but you will need to install the program that enables the user, you-to modify the settings, including pen tip pressure-a very important thing to understand as I remember when I was first trying to master the stylus on my own.

The Tooya Pro tablet integrates easily with all the Adobe programs including the Flash products as well as the one I use the most, Corel Draw. The biggest thing I had to work on was mastery of the stylus and not hitting (accidentally) those little buttons on the side which function as mouse-click buttons

That’s when I finally realized that’s why I had sub-menus dancing around I didn’t attempt. All I have to do is lightly tap a tool from the side panel that I need to use and boom, I can go from the Shape Tool to the Bezier on a dime.

The other tablet we own is a Wacom Graphire 3 (model no CTE-430) I like how small it is ( a little thicker than my Tooya.) Glad to have recovered it, but the corresponding stylus pen is somehow misplaced.

Wish I could find a new replacement; I think the trouble is the Graphire series goes back aways. But I digress a little, it’s a great starter tablet with the following features:

Even though this model goes back to about 2004 Amazon still keeps the Graphire in stock. There is also a blue or silver version, and it includes a wireless mouse too!

♥All this info I obtained when trying to hunt down a new replacement pen, lol. 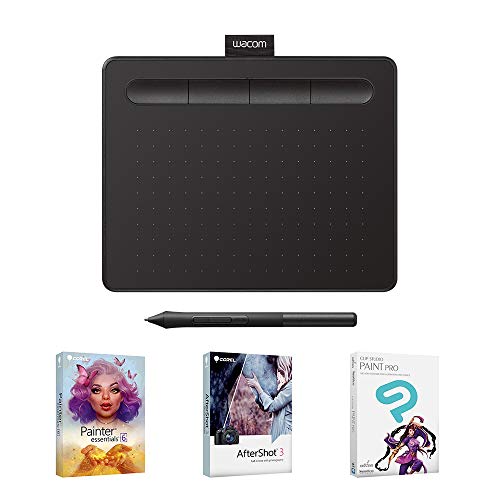 Even though we liked the Wacom Graphire series, trouble is it is getting harder to find a newer and later model available. Which leads me to check into more of the Wacom tablets….one of the very best brands overall, I was able to find some more up to date tablets to show you.

The Intuos is one of the most popular generations available today, with lots of fans and happy designers leading the way. With a 6″ by 3.7″ workspace area, the Intuos has keys that can be programmed to various shortcuts . The pen, which has almost 4K levels of pressure sensitivity, doesn’t use batteries so not having that issue to slow you down is a plus.

You can connect the Intuos via USB port or wireless bluetooth which is great because if you’re experiencing lag with the wireless install you can fall back on the USB method. Lastly, if you register your device, you’ll also be eligible to receive a bonus of three software programs at no extra cost. (One quick exception, though, on that, the software subscription lasts for two years, which is the one caveat there. ) Measures 6.9″ w by 7.9″ l.

Some people said the wireless install didn’t work well, you may need to pay fees for updated versions after the free software bonus needs renewing.

The Black and Red One by Wacom

This one caught my attention pretty quickly, and I believe it is one of the newer editions made by Wacom today, it is a little smaller than the Intuos, and being Mac and PC compatible, it operates via a USB port cable. Unlike my Tooya Pro, the stylus doesn’t need batteries – which is a real plus, because who wants to worry about changing the batteries when you’re in the middle of an extensive drawing session you’re trying to focus on?

The working area measures about 6″ by 3.7″. It includes besides the tablet the stylus, USB cable, three stylus replacement nibs and the nib remover ring for good measure. It is compatible with Photoshop, Illustrator, Corel Draw, and many other programs, whether software or open source platforms like Inkscape, wherever you want to hone your skills! 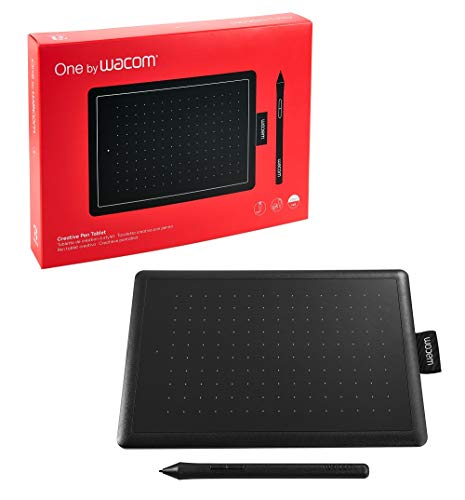 One by Wacom Graphic Drawing Tablet for Beginners

It’s recommended to install with Mac OS x systems 10.10 and up, and Windows 7 and up. Also I heard from one consumer that his Linux system synced up just fine. The electro-magnetically designed pen has 2 keyboard shortcuts and is pressure sensitive so you can go to thin to thick lines on a dime.

At the time of writing, it was under $100 which is awesome …if you are looking for a good tablet for beginners at a great price, this is it! Also, I think kids will enjoy using this one too, especially if they have a strong interest in drawing comics, manga, etc.

Great price. nice size, no batteries or charging time to be concerned with, 2 shortcut keys on pen, compatible with many devices.

Doesn’t have a touch interface, no shortcut keys on tablet. 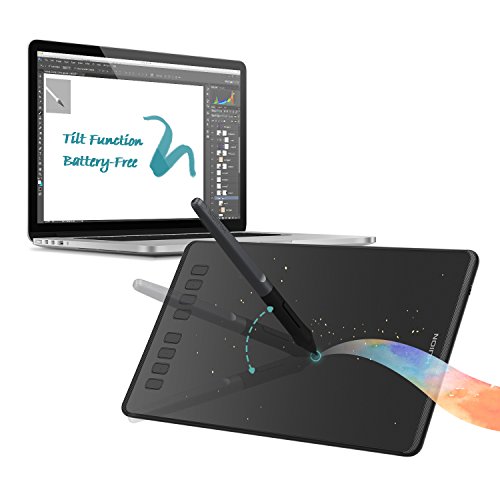 I know how much we love Wacom, but here’s another brand worth its salt too….Huion, a company that also makes good drawing tablets for beginners. This edition is a later one, and has a lot of great features. One of them is the pen’s unique “tilt feature” which lets you hold it within a 60-degree angle so even the most in depth art gets developed.

No batteries needed for this baby either…it comes with a USB cable as well as 8 replacement nibs and a remover ring, as well as a nice carrying bag too. The 8.7″ by 5.4″: work area provides lots of space for self expression, and the pen has up to 8,192 levels of sensitivity.

At an ultra slim 8 mm thickness, you can take this tablet with you anywhere you need to go! By pressing the press lock key on the right side of the tablet, you can avoid accidentally hitting one of the 8 buttons on the side of the tablet used to program keyboard shortcuts.

At a 5080 LPI resolution, you can produce high quality images with the best of them.

So if you’re serious about learning to draw, you need a tablet that’s gonna work as hard as you do,and provide reliable performance. The other good news is that these tablets are made for non-art, office program functions as well, so if you ever want to take a break in between learning to draw, you can get some good practice using it in place of a mouse to do basic functions like signing your name and tracing pictures.

But there you have it, in terms of the best drawing tablets for beginners, I’m pretty much sold on my Tooya Pro, and Wacom is definitely the one other brand I would consider! 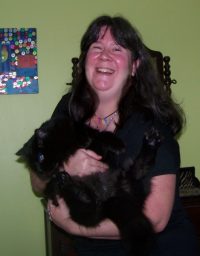 DIY Birdhouse Ideas: This Project Is For the Birds, Literally!271 Total Shares