Is polymer clay waterproof and how to tell? Have you been asking this lately? Well, being an oil-based substance, it is not only waterproof, but it’s pretty water resistant too. As a matter of fact , my “debut” project was actually a figurine that I ended up turning into a glitter globe (yes, I must have been thinking big back then.)

I wish to heck I could find it, as that was so long ago. But I digress.

Anyway, unlike air dry clay which is NOT waterproof and needs extra protection post-cure, polymer clay is tough stuff. Let me share a story here for emphasis….A while back I used the wrong kind of glaze on a project that made the whole thing sticky. I don’t know what it was but what an ordeal. Maybe you’ve been there I’m sure we’ve all done this at some point!)

Anyway, I had to use rubbing alcohol to get the sticky layer off. That was a pain in the you know what. Some of it budged, but then I was forced to do other things…an emery board, and (shhh) a little Goo Gone. Did I finally get all of it off? You bet. Did that project get damaged? Hardly. 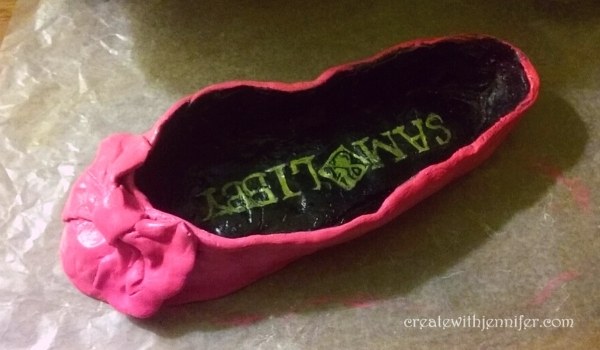 At some point the bow of the shoe did come off, but that was an easy fix. The point is it held up to all that and I was finally able to apply a new coat of paint to it. How many craft materials can you say THAT about?

That being said, let’s elaborate a little further on the waterproof/water resistance issue as it relates to things like baking and glazing, two things you will inevitably run into at some point. Before baking, uncured clay is also waterproof – if you drop a little on there you notice it will bead off.

Which is why if you want to create interesting color tints or likewise, you have to use a substance that isn’t water based, like alcohol ink. It’s important to let any kind of moisture evaporate from the clay prior to baking, as it can result in air bubbles that could inhibit the success of baking and make it more fragile later on, so

Any residual moisture in polymer clay needs to evaporate before baking.Click To Tweet

Afterwards, the solidness of your piece is well assured (if you did your homework.) Another thing about polymer clay is not only is it not water soluble and pretty resilient, it’s not porous either but you shouldn’t treat it as such as you would with something made of ceramic clay (which are kiln fired.) In other words, there are some limits – don’t put finished pieces in the dishwasher (all the heat and steam could do damage to your pieces more than the water.)

So don’t make the mistake of thinking you have to protect everything you made with a coat of water based varnish – unless you want to create a finish of something like crackle look, antique or vintage, or a little more shine with satin or gloss.

Another reason is to step it up a little in the vibrancy department. Some finishing glazes can enhance the color a little and make it look shinier or darker. I do that with most of my figurines and I notice a difference right away.

Well there you have it – your clay, on its own, doesn’t have to be coddled as much as it needs to be treated with a little common sense. and insider knowledge. Hope this helps! 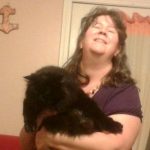 How to Soften Polymer Clay – Three Things That Worked For Me!66 Total Shares

Homemade Primer Paint- Run Out? You Can Make This in a Pinch!54 Total Shares