Hey guys! let’s take a look at the topic of modelling clay vs polymer. Do you ever get these confused and wonder how they get classified as such? Yes, it is an interesting topic.

Some clays are more “entry level” than others, as yo may have discovered, and some have a different makeup altogether. Knowing what to expect from different clays can set your mind at ease. 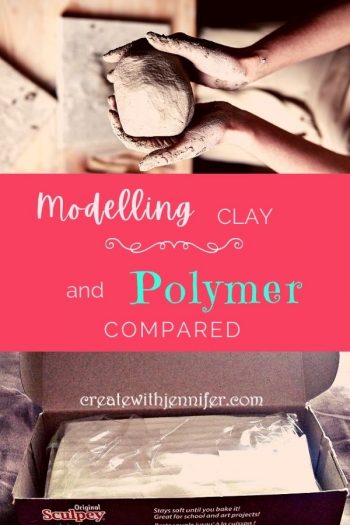 In this article I hope to enlighten you on these types so you can decide which is best for you and your situation! 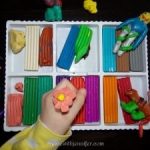 I remember when I was in grade school I received something as a gift from relatives, no doubt – called “Plasticine”. It came in this rainbow of vibrant colors and was pre segmented right out of the package.

What you see in the left image is pretty close to what I was using. It was fun to play around with, but you couldn’t get it to make something permanent. That’s because it wasn’t designed to do so. It was mainly developed to give kids an outlet for their creativity no doubt.

It also goes into the category known as “non hardening clay” There is also a more “adult” version, you may know it as a brand called “Plastilina” or something similar.

What is Modelling Clay?

Now you may have thought that was called “modelling” clay, and you’d be pretty accurate. You can use it for more than just “practice”, if you choose a less entry-level brand. You can also scout for the type that does dry on its own, this is known as “air dry” or “self hardening” clay. Sometimes it gets the moniker “modelling” clay as it’s very basic looking.

The first self-hardening clay I worked with, at the age I was, was a brand called Das, which was made in Germany, and is an excellent brand. The material makeup is a composite of things, like minerals and oils.

Very often this is what your typical clay display at the local craft store looks like.  Notice how the modelling clays come in larger sizes? 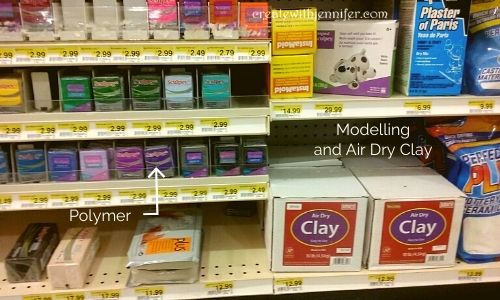 Polymer clay has a different makeup altogether. It is made from polyvinyl chloride, also known as PVC, and is meant to be cured permanently in a home oven. It’s highly versatile and can be used for everything from jewelry pieces to wall hangings. It comes in lots of different colors too, from conservative neutral colors like white or tan, to bright and funky colors, there are even pearlescent and neon colors, too!

Even so, if you’re looking to get a unique, blended look for something particular you can combine 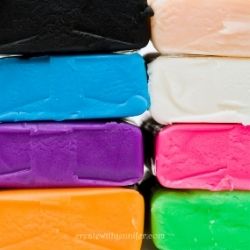 colors with a technique like millifiori and clay canes, in which layers are folded together, in a roll, and then sliced into shapes, or you could add your own colors with something like mica powder or pastel chalk.

It’s got different brands-The two that are the most popular are Sculpey, my favorite, and Fimo, which is a little bit different, but also has most of the above advantages. Fimo has an interesting backstory. Apparently its original creator, a dollmaker from Germany affectionately known as “Fifi”gave the clay its name-“Fimo” is an acronym for “Fifi’s Original Modeling Compound”.

I used Fimo for the first time when I was a junior in high school, but my experience was met with disappointment. I got a defective batch that crumbled right out of the package-what a bummer! So that turned me off to the brand, but little did I know at the time that if I had known about the different composition, I could have added a little water to it and brought it back into shape and softened it up– however, looking back, I think that particular batch was a bad one.

FIMO has also come out with a line of air dry clay, too. Some of these brands tend to cross over and offer both clay types. 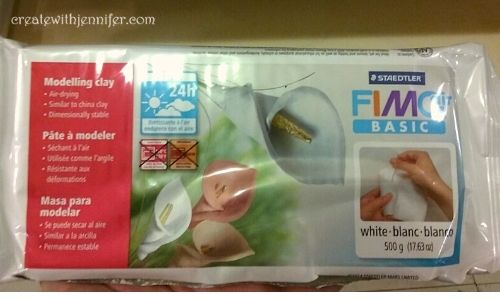 Can You Bake Modelling Clay?

And this is where some confusion sets in. The term “modelling” which is kind of open-ended, may lead people to believe it is bakeable too…after all, when you look at displays at the hobby stores, you notice that modelling clay comes in lots of appealing colors. And so does polymer. But the similarities stop there. Non-hardening modelling clay is made to be shaped, formed, kneaded, but since it is permanently soft, you can re-work it, but you will never be able to permanently cure it, as it was not formulated to do so.

In fact you could have a mess on your hands if you do. f you’ve ever had a project to actually melt in the oven -yikes! – chances are you have used some type of modelling clay.Don’t beat yourself up, we’ve all made mistakes like that – it’s an easy one to make because some packages of clay that come in those vivid colors are not always distinctly labeled. So be sure to read the “fine print” going in. 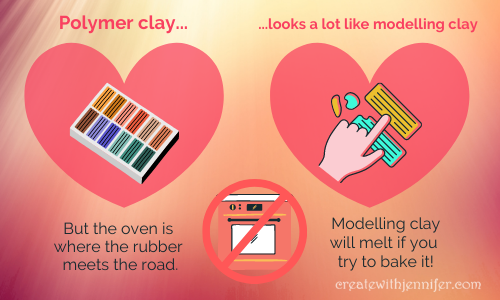 Can You Bake Air Dry Clay?

Some people believe you can dry a project made from air dry clay in the oven – mainly this is done in the name of expediency. Or if your environment is not as warm as it could be. From what I’ve heard, you can, for a short period of time, and on a very low temperature, like 200 degrees F.  However be aware that attempting to speed things along could cause cracks to form, so it’s best to let it do what it was designed to do-dry naturally.

Which One Should You Choose?

I can’t make that decision – but I can give it clarity. So if you think you’d enjoy the convenience of making sculptures from a natural looking type of clay that does not necessitate owning a kiln, I’d recommend self hardening modelling clay just be aware that YMMV in several ways – as it cures, which how long will depend on the size and thickness of the clay you use for your project, it will lighten in color as it dries, and it will also shrink somewhat.

If you want to use armatures, that is something to keep in mind. Also, a tendency to crack as a result of the factors mentioned, which you can minimize if you know how to prevent it with some tools and tips.

The non-hardening clay I mentioned that stays soft long-term, is a good choice if you’re not sure what direction to go in. You just want to get started – you have no idea what you want to do with it yet.

Polymer would be best for you if you like making small-scale objects, and you’re looking for a product that’s versatile as well as adaptable. And you like the idea of making few changes to your objects, as well as the ability to set it permanently. All are my criteria, and that’s why it’s my favorite out of all of them!

Well, hopefully this article will help you to decide, I personally would try both and see which kind you enjoy the most! There is no “right” or “wrong” answer here-it all depends on your personal preferences and needs. Good luck to you, and clay on!