Hello clay peeps! Ready for something a little more ambitious than rolling coils and snakes-how about sculpting the anatomy of figurines -yep, detailed things like hands, feet, fingers and toes? It’s been awhile since I did this, so it’s going to be like going back to old times.

The last time I really did replicate a human figure was when I did the boys for the bookends. And for this, I will be using Super Sculpey. This is my preferred clay type for human figures. I do like the translucent too, and it can work pretty well.

This project will be a model of a crucifix. It will also be more of a mixed-media piece using materials other than clay. I did another one a long time ago and it ended up a gift for one of my husband’s relatives. I made the cross out of wood and Jesus out of Sculpey. Pretty much want to follow that same setup.

First thing I’m doing is sketching out my figure. I think that’s a good idea to do that first. If you’ve taken drawing lessons (I have) this may come to you more naturally. It helps if you have something on paper to study or use as a model. If you prefer you may want to get your hands on a figure drawing guide instead (perhaps your local library has these?)

Then I created a wire armature like this. This will be needed to create stability with the figure. I used a 16-18 gauge wire which will flex easily. It will also help to get the proportions more accurate. 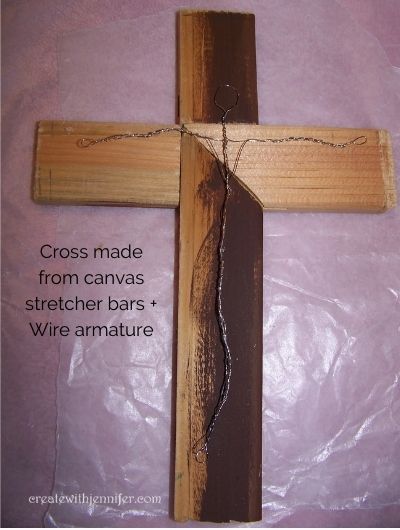 Now, for the cross…I’m using wood made of canvas stretcher bars. Yes, in the past I removed some actual paintings form canvases….because the stretchers were real wood I decided to keep them to repurpose for something one day…well here it is. I thought about other materials to make the cross …cardboard…didn’t resonate here…I wanted it to be real wood.

I am not into carpentry but I knew it was what I had to do…measure and saw off pieces of the stretcher bars to form the cross and with accurate measurements. Measure, one, two, uh, more like five times, then cut. I wish I had some balsa wood as it is so much easier to cut, but that’s the breaks!

I’ve formed the armature first, for Jesus; but by working on the cross first, I had an idea of the right dimensions. The cross is about 10″ in height, and because of the way the stretchers are arranged…I joined one corner to another, which made things easier. A little. But the other side of the cross and the top took a little guesswork, and cutting.

Next to glue the cross together. and then apply primer, and finish with some brown paint. I am making the “Inri” part out of cardboard.

OK, now that the hard part is out of the way, onto my favorite part…the sculpting!

As I had feared, the cross parts didn’t attach securely like they should have outside of the ones that are hinged at the corner. I solved that problem with a base made out of cardboard that I traced around and cut in the same shape, and glued them together. While I’m waiting for that part to set up, since I’ve got my armature ready, I’m ready to move on to the clay!

OK, we’re back…After I kneaded my clay, I broke it into pieces for the torso, head, arms and legs. using the armature as a guide. This is just the preliminary stage.

Then I started to re-work the clay pieces, and I begin with the head. Always do a top-down approach with figures. Next I wrapped the clay around with the shoulders/arms. I squeezed out a little more at what will be the hands. I did the same with the tors, legs and feet. I bent up the little round loops at the bottom (which indicate feet) since the whole idea is that the wire will follow the contours.

Just think of this as a “rough draft” no details yet. Just get the clay parts wrapped around the wire first. For Jesus’ loincloth I am using white Sculpey Premo!. 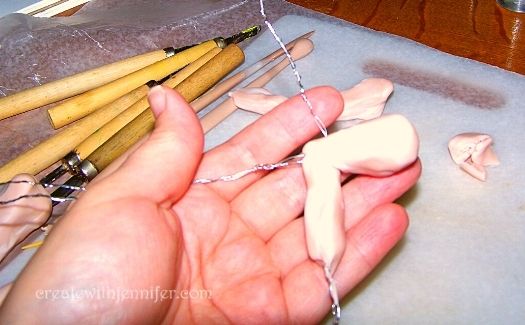 I had made the arms into two parts, the forearm and the bicep part, which I felt would let it flex easier with the shoulders Then I kept sculpting the arms and worked the two arm parts together, being mindful to make them look tapered. Since our biceps are larger in real life.

Hands can be tricky looking, but they don’t have to be. Take your sharpest tool, and just make 4 slits like I’m doing. Of course, they will look kind of “raggedy”. Use the knife to separate the fingers and thumb and gently pull on them a little, so they will have a more tapered, natural look like our fingers do. Repeat with the other hand. Also remember that our index finger is the  longest.

I’m a big fan of animation, and one time I heard a creator say that they didn’t give characters all four fingers because “it’s easier to draw three”. I understand that. But since I’m trying to do a realistic sculpture, I’m going to craft four fingers .

Feet are a little bit easier. Do like you did earlier with the hands, and make four slits with the knife, but since our toes are shorter, they won’t look as weird. You may need to use a rounded tool to smooth them out a little.

I’m using some of the Premo! that was left for the hair. I’m rolling very thin coils, which is the easiest way to simulate hair or a human figure. Every representation in art shows that Jesus had reddish brown hair, and I think my first project did show that, but I don’t have a brown pastel chalk.

I’m going to have to make do with a yellow and red chalk, and dip the clay into the dust particles, but later I will paint it brown. But this added color will make it show up and differentiate it better from the rest of the head.

Facial features, i think are the hardest. You’ve got eyes, a nose, mouth and ears. For eyes, I take the pointed tool, and make a small depression on the left and right to simulate the eyes, the nose, I take my rounded tool and push down on either side below the eyes,, I’m pushing clay towards the cheekbones so it looks more readily apparent.

The mouth is easy and you take the same tool for the eyes and just indicate it right below the nose. I chose not to do ears for this one as I don’t think they’d be showing.Whether or not you choose to carve out ears is up to you, in the case of a male character with a short crew cut, you should, female (or male) characters with a lot of long flowing hair, I don’t think you need to, but that’s just my preference.

I’m going to make the crown of thorns from some thin gauge wire, so that will go on the backburner.

Now I’m adding some details…the spear wound, and I’m using straight pins to simulate the nails. Before I bake it, I’m going to arrange it on the cross I made earlier so I can make sure the posture will be correct. Meet me shortly after you bake your finished creation…congrats-you’re almost there!

At long last…My finished project! (I finished it off with some clear coat Krylon polyurethane)

Remember, it just takes practice to get good at that anatomy!